Compaction and paving equipment manufacturer Dynapac has underscored its commitment to helping customers reduce their environmental impact by developing a unique electric powered tandem roller. And, appropriately, it has been developed in conjunction to one of those customers: SKANSKA in Sweden.

The new machine, which is currently undergoing field-testing, is designed to compete in the 1.5 tons tandem vibratory roller class. It features a drum width of up to 1.0 meters, develops a centrifugal force of 16.7 kN, a nominal amplitude of 0.4 mm, and a static linear load (front/rear) of 6.1/ 7.9 kg/cm. But, unlike the diesel fueled model upon which it is based, the new CC900 e tandem vibratory roller produces zero emissions at the point of operation.

The new CC900 e arrives at a time when many equipment manufacturers are looking to electric power to help reduce and ultimately eliminate exhaust emissions. Yet this is not a first for Dynapac. In fact, the company produced a battery-powered concept machine as far back as 2010. That machine was ahead of its time. But with electric machines becoming increasingly popular, particularly among equipment rental fleet operators, the time for the CC900 e is now perfect. Initially, the CC900 e will be produced in limited edition.

Weighing in at 1.6 tons and with an operating width of 0.8 to 1.0 meters, the CC900 e double drum vibratory roller has been designed to satisfy the specific demands of utility contractors and rental fleet operators alike. It delivers the same linear load, amplitude, frequency and travel speed as the diesel-powered model upon which it is based.

To ensure that this revolutionary new product met the specific needs of end users, Dynapac developed the electric-powered CC900 e in co-operation with one of those customers; global contractor SKANSKA. From the very beginning of the research and development phase, SKANSKA has reviewed specifications and prototype machines. Another customer, LOXAM, the N°1 equipment rental company in Europe is giving valuable feedback, starting the field-test of a CC1000 e within some weeks.

“Co-operation is the key to developing a successful product and direct user input is incredibly valuable to a project of this kind. From the user perspective, it is equally important to be acquainted with the equipment at an early stage. Even though the compaction performance is unchanged, there are still small changes that have to be the work procedures when transitioning from traditional fossil fuel to electric power,” says Dynapac’s Fredrik Åkesson. “The earlier operators can be exposed to those changes, the easier it will be to adapt to the new equipment.”

The electric-powered CC900 e unit has been in development for more than two years and involved a 20-person research and development team. Although the battery system used in the new model is both proven and popular, it has been subjected to rigorous testing to ensure that it meets the specific needs of the compaction equipment sector and is capable of withstanding the vibration generated by the roller. During that testing, prototype machines have clocked a massive amount of hours in operation. Only now is the Dynapac design team willing to begin making the machine available. The timing could not have been better.

“We have seen electric and battery power being applied to mini excavators, skid steer loaders, access equipment and site dumpers. And these have been widely welcomed by forward thinking and environmentally-aware rental fleet operators and contractors. The only thing missing has been an electric-powered tandem vibratory roller to run alongside these other zero emissions machines,” concludes Dynapac’s Fredrik Åkesson. “With the development of the CC900 e, Dynapac has taken a massive technological step. We are proud to be the first realizing this from an “exhibition concept” machine into something we now have on the field. That step sets our customers on the path to a zero emissions future.”

Dynapac is a leading supplier of high tech soil and asphalt rollers, light equipment and pavers, committed to strengthening customer performance by being a partner on the road ahead. Dynapac is represented worldwide via its own regional sales and service offices, and cooperates with an extensive and professional distribution network. Headquartered in Wardenburg, Germany, Dynapac has production facilities in Europe, South America and Asia. Dynapac is part of the FAYAT Group. 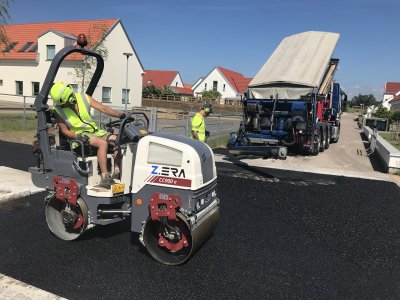