In 2022, the Sardar Vallabhbhai Patel International Airport in Ahmedabad underwent a phenomenal transformation. Along with the new runway, there are many new additions to the airport that are making it easier for travelers. For instance, there’s an EV charging station at the airport, a newly inaugurated cargo terminal, a new airfield lighting system, and much more. Dynapac played a significant role in upgrading the runway and the Ahmedabad airport. The resurfacing work of a 3.5 km stretch with a 45m width was successfully completed in record time. The uni-directional cross fall of the runway was changed to a bi-directional slope. There’s now an 8 km drain parallel to the runway on either side with 05 taxiways and 02 rapid exit taxiway stubs. The runway centreline lights offer a provision for touchdown zone lighting that illuminates Runway 23 for better visibility. A total of 300 construction equipment units were deployed for the project, including pavers, excavators, rollers, dumpers, bowers, mechanical sweepers, transit mixers, and more. Dynapac is privileged to be associated with this prestigious project. We take inspiration from this case study to create new world records, build new benchmarks and set new guidelines for excellence in the industry.

Ahmedabad is the busiest airport in the state of Gujarat, with more than 200 daily flights during the pre-covid period. The airport is an important and bustling hub that provides travelers with daily domestic and international flights. The high level of traffic and other factors made it eventually necessary for the airport to undergo several improvements to keep up with the growing post-pandemic travel demands.

Due to increased travel this year, the challenge of re-carpeting the runway without impacting flight operations was taken up at the airport. India’s airports continue to experience rapid growth, which is seen in the considerable investment in aviation infrastructure. The project at Ahmedabad was undertaken using the latest technology and in cooperation with leading companies.

Ahmedabad Airport has a single runway, designated 5/23. The runway is 3489 meters long and 46m wide and surfaced with concrete and asphalt. The runway enhancement project includes runway overlaying, strip grading and slope assessment, grading of the runway end safety area, stormwater drains construction, and the reinstallation of signages. The runway project was completed with one million safe manhours and with the support of 600 individuals featuring staff and workers and 300+ sophisticated pieces of equipment. The re-carpeting project was estimated to be completed in two phases that would span three calendar years. Later, the target was set at 90 days, but it was achieved in just 75 days!

AICPL played a significant role in fulfilling the project’s essential requirements. Together with Adani Airport Holding Limited (AAHL), they only used nine hours of Notice to Airmen (NOTAM) daily. During the 75 days of re-carpeting work, AMD kept the runway open for 160 daily flights for almost 15 hours a day. As an aviation infrastructure company, AICPL handles projects with consistent quality and safety assurance.

Paving our way to a world record

AICPL, along with Dynapac, was able to achieve an impressive world record. The re-carpeting of the 3.5 km runway was done in a record time of 74 days - an all-time best amongst brownfield runways in India. It is estimated that the amount of asphalt laid during the re-carpeting of the runway was equivalent to a 200km stretch of road, and the concrete used for the runway drainage system was enough to build a 40-story structure.

In order to complete the runway in record time, Dynapac’s full fleet of equipment was used. This included Dynapac 9 wheeled CP275 PTR, CC425 Tandem Roller & SD2530CS Paver. During the project, the company also achieved the milestone of laying 4178 metric tons of asphalt using the Dynapac Paver in the front row in just 9 hours.

A synopsis of the customer interview:

Since airports are gateways to respective regions, they are critical in creating the right impression on visitors. Moreover, as per IATA forecast, they will see almost double the passenger traffic by 2036, increasing the pressure to expand airport infrastructure and meet the unprecedented demand. With the existing airports in PPP model and the government’s plan to privatize over 22 airports by 2025, AICPL envisions more opportunities in the aviation sector. In the next five years, AICPL will become the one-stop solution for all airport infrastructures, ranging from construction and preservation to maintenance across all streams.

Kritarth Raja, Chairman of AICPL was impressed by the cooperation with Dynapac and their contribution to achieving the world record. He mentioned that a project gains momentum with its efficient resources. In doing this, they deployed the Dynapac 9 m paver, which helped them achieve the target of working in sync with different OEMs. AICPL aspires to build lasting partnerships to enable its vision for the future. While breakdowns are unavoidable, it’s possible to control the frequency of occurrence. The reason the company always deploys new machines is to control this frequency. This is also why the availability of critical spare parts at the site is always ensured so that there is no loss of time during any such occurrence. 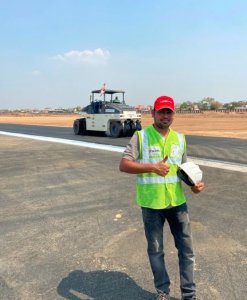