After almost 49 years at Dynapac, it is time for Stefan Carlsson to sum up his career. In our chat with Stefan, he gives us facts mixed with interesting anecdotes that paints a colorful picture of his time at Dynapac for us. Our conversation is repeatedly interrupted by his phone ringing and orders for 2 rollers are placed during the interview. One thing is for sure, very few people in Dynapac can match Stefan's business knowledge, experience, and network.

When did you join Dynapac and what positions have you had since then?

I started in 1973 as a trainee at Vibroverken (the name-change to Dynapac took place later that year). I was only 16 years old, working mostly on repairing and servicing light compaction products. After that, I went into the army and later I was invited to come back to Dynapac to work as a service technician for rollers and later also for pavers. This was a good training proved valuable for me and in 1979 I started working as a service technician responsible for West-Sweden. After that, I was offered a job as a Service Manager in Saudi Arabia, which I did for about 1.5 years. It could have been for longer, but my girlfriend was not allowed to come to Saudi Arabia and stay with me because we were not yet married. We got married in the summer of 1985, but even so, there were problems with the authorities and eventually we decided that I should move back home instead, which I did at the end of October 1985. I remember sending all my luggage directly to Gothenburg where I lived, but when landing in freezing cold London for a layover, I had to buy extra clothes to keep from freezing.

My career at Dynapac continued with various assignments, including workshop manager for several years, but also as a coordinator and mentor when Dynapac set up sales- and service- offices in Russia and the Baltic States. It was a fun time and a great collaboration both internally and with the Russians.

In the late -90s I started to work more with technical customer support including application training and product demonstrations. I managed training courses not only in Scandinavia but also in Russia, Uzbekistan, the Baltics and even in China.

In 2014 I finally started in sales, and I really enjoyed it. My background and knowledge come in handy as I know what customers need and what their demands are. Here I enjoy being able to help them and knowing that my advice will make a difference for their business.

What has been the most fun part of your job?

I've always enjoyed "chatting" with people. I've been responsible for more trade fairs than I can count, and I enjoy that very much. Furthermore, I enjoy working with the training activities, for the same reason - you meet a lot of people and get the chance to exchange experiences and build up your own knowledge further. I am a pragmatic person and solve things this way, which has helped me in many situations.

How many rollers have you sold during your career?

I´m not quite sure, but I did a little calculation from the last five years of business, and I came up with 493 rollers. I'm proud to have sold a whopping 93 SEISMIC machines since 2019, the first of which was already sold at BAUMA Munich 2019. This year has been an incredibly good year, with about 200 machines sold in Scandinavia, trench rollers included.

Many thanks to Stefan for the great talk and good luck in the future! 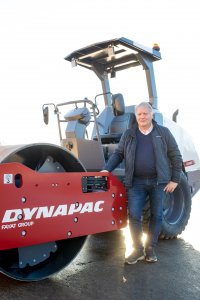